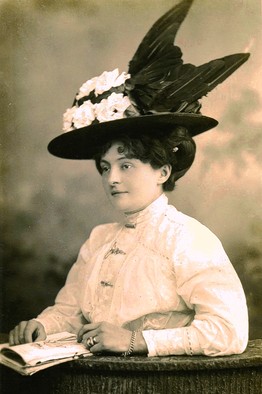 PINK POSIES
I'm a creature of the no-hat age,
But now hats seem to be all the rage.
Witness 'the wedding' recently
When enormous hats showed diversity.
*
A certain Princess, who shall be nameless,
Cannot dub her advisers blameless.
Whoever let her go out like that,
With a cardboard corkscrew on her hat!
And 'selfish' hats were on display
Which definitely must have got in the way.
Imagine sitting in a pew
With a dinner-plate in front of you!
Some were grotesque, like space-age crowns
Which made their wearers look like clowns.
And what about hats perched on the  side,
Appearing ready to do a slide!
Great round hats didn't look too hot
Plonked on bodies decidedly squat.
Now and then one saw a bonnet
With 'success' writ large upon it.
But they were few and far between
Upon the important nuptial scene.
*
Somehow, the lady in the pink confection,
Seen above for your inspection,
Looks more regal than the Abbey crowd.
She looks demure, yet, also, proud.
She looks secure, she looks serene,
More so than those who met the Queen.
Even though black wings seem to say
'Any minute now I'll fly away'.
*
------------------------------------------------------- 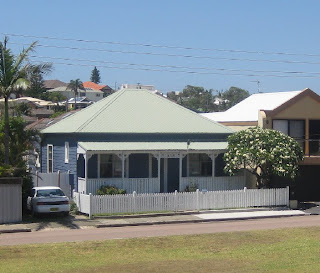 A TRUE BLUE VIEW!
Sunday morning in Australia; the starting of the day
And I see this charming picture as I look across the way.
I'm standing on my balcony and the world seems blue and white,
Lit with all the clarity of Australia's brilliant light.
It's just a modest cottage, 'done-up' with a lick of paint,
But the colour-scheme is charming and the whole effect is quaint.
I gaze at it across the street and wish that it were mine,
But it's so very delightful that I'd have to stand in line!
Add the glory of frangipani underneath a summer sky
And, when I say 'I love Newcastle', you won't wonder why.
*
Posted by Rinkly Rimes at 7:10 PM

Some of those hats were really stinking,
Makes you wonder WHAT WERE they thinking !
Love that cottage and your view,
I'd stand in line to have it too.
Thank you for a lovely pink Saturday post,
So far I like your prose the most...
happy pink Saturday !

Your poem about the wedding hats is a riot. I watched the wedding and laughed and sighed over many of the guest's outfits - go figure! I cannot imagine dressing like most of those people for such a special occasion.