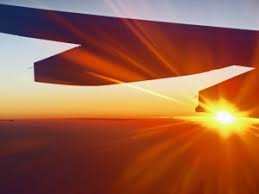 THE RED CENTRE
As you're flying over Australia all you see is red;
Not only to the east, north, west and south but red going straight ahead.
Not for half and hour or so but for hours and hours and hours;
It's a very, very, very, red country, this Australia of ours.
And it isn't even enormous, the really livable part;
It's green round most of the edges with a gigantic blood-red heart.
If the Centre were an ocean, Australia would be
Two pretty ordinary islands, floating in the sea.
One would be called Eastland, and Westland would be far away,
The twain would probably never meet, let alone say 'G'day!'
Except for useful minerals, the Red Centre is, well, just red.
For all intents and purposes we have a heart that's dead.
And yet our fossil history proves that this baking land
Was under water once upon a time! Water where now is sand.
Fossils of fish and sea-shells are found in the Centre's rocks.
Geology's a science that yields up some strange shocks.
I wonder whether Climate Change will reverse our situation?
Whether rising tides will, eventually, result in inundation.
Maybe some centuries lie ahead during which sand will turn green,
Green with plants and trees and flowers! What a sight to be seen.
Of course, none of us will see it, but will we have played a part?
In raising the earth's temperature maybe we'll green our Heart!
*
-----------------------------------------------------

REDHEAD!
How many hopeful gentlemen have gone to Redhead Beach,
Hoping to meet a girl with auburn hair?
And how many men have drifted home despondent and downcast
Because they didn't find a red-head there?
Only three percent of humanity is blessed with russet locks,
And most of them are braw redheaded Celts,
With a sprinkling of freckles, an aversion to the sun,
And a good old haggis tucked beneath their belts!
Most have fiery tempers and are passionate as well;
One could almost say that they are quite mercurial.
This description suits them whatever sex they be,
Whether the name is Malcolm or it's Muriel!
Some famous names will come to mind; Ginger Rogers, Danny Kaye,
Greer Garson, Rita Hayworth, Lucille Ball,
Woody Allen, Spencer Tracey, Nicole Kidman, Clara Bow......
They were famous and, indeed, were red-heads all.
But see the sign above which has a girl with auburn hair
Coaxing young men to dally in the sun!
I'd say that it's false advertising! All the men will find
Is a pinkish cliff! And Redheads? Not a one!
*
Posted by Rinkly Rimes at 6:05 PM

I actually learned a bit about your country from reading this one. Mostly red? Didn't know. I suspect your land is much like mine- the American Southwest Desert.

It's a strange world

You really have that red thing going on! I loved the image of Australia as two green islands separated by an enormous red center. I hope on my next trip there to explore some of the red territory. As to the second poem... a funny take on those fair-skinned, freckled, redheads...of course this is coming from a "swarthy" Italian! Vb

Love that opening photo, beautiful and I didn't know that Australia was red at its center. But like the detail and imagery of your poem. Have known a few redheads and yes, they have been a bit mercurical in nature, except for a grade school chum. She loved music, laughter, and was quiet and thoughtful.