Molly Spotted Elk! What a curious name.
But it seems show-business really has to take the blame.
Molly, a native American, appears on the cover of this book.
The plum-colour first attracted me and I took a closer look.
It's easy to take notice of the feathers and then the natural grace;
But look closely and you'll see, less clearly, a picture of a lovely face.
Molly was a stage performer, wth a great ability to dance,
And she chose to follow her profession on the stage in France.
There she was very successful, though it pained her, so they say,
To have to be a 'typical native', dancing a particular way.
She married a Frenchman and had a child but then came the Second World War,
She fled from France without her husband, dreading what was in store.
Molly never saw him again. She returned to the U.S.A.
It seems her very interesting life reads exactly like a play.
* 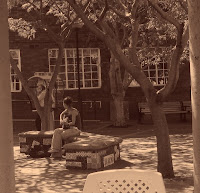 It was meant to be artistic;
It turned out to be mundane!
This girl looked rather charming
As she strummed-out some refrain.
The dappled shadow attracted,
The decorated wall entranced,
The sunlight on the shady leaves
Picked up the theme and danced.
I have a great affection
For our local Beaumont Street,
And here was a tiny corner,
A busy-day retreat.
But oh what an intrusion!
The fellow with the phone!
Why didn't I wait a bit longer
Till my guitarist was alone?
*
Posted by Rinkly Rimes at 6:52 PM

Molly's life does sound like a play, Brenda. I assume she took her child with her when she fled France.
And the guitarist in the second photo seems to be looking at the man with the phone, too.
K