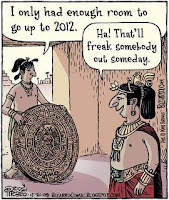 Millions of people around the world think that 'the end is nigh'.
And the famous Aztec calendar, seen here, is the reason why.
This cartoon interpretation really appeals to me.....
Since the round stone could only hold so much......clever though it may be.
Predictions are a worry when they're based on the human mind;
Predictions of the weather are those of a different kind.
Predictions of Global Warming may or may not be true;
But forewarning ourselves about it seems a sensible thing to do.
However, Aztec predictions, though dealing with agriculture,
Were influenced by ancient things, pertaining to an ancient culture.
How do those so fearful expect the world to end?
Worrying about it must be driving them round the bend!
Do they expect an asteroid to hit us fair and square?
Our scientists would already know if such a threat were there.
It's true such a thing may happen but certainly not this year,
So it seems a rather silly thing for anyone to fear.
Is an epidemic what they dread? Again, a possibility,
But for one to kill us all this year is beyond all feasibility.
Do they fear The Bomb may get us? The world is awash with War,
But not really more than usual. We've been there before.
Anyone who lived through the Cold War, when fear was justified,
Would know that danger is less now......let that be a guide.
That the world will end on a certain date is something to expect;
It may die from over-use, 'greenhouse' or neglect.
But to say that Aztecs long ago knew about our fate
Seems highly improbable to me.
A date is just a date,
*
----------------------------------------------------------------------- A woman who loved a good thrill
Clambered into a pelican's bill.
Said she 'With these fish
I can cook a great dish!
Silly me! I've forgotten my grill!'

Just as last Saturday proved to be a dreadful disappointment, so yesterday was a pure delight. I've rarely enjoyed such a lovely day! For one thing there was a whiff of Spring in the air, though it's not due till September. It was 20 degrees, with a brilliant blue sky and gentle breeze. We drove to Maitland, about an hour away, to perform 'Cindy' at a Probus Club. The audience was very responsive, joining in the singing with a will, and the cast performed wonderfully. I couldn't get good photos because the light was coming in at the wrong angle, so I took one from the back, which captures the atmosphere, if nothing else. 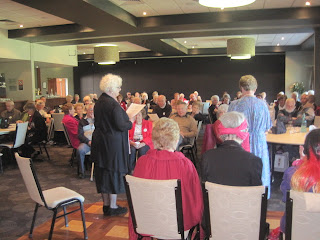 Afterwards we went to the Heritage Nursery for lunch. Speaking of atmosphere, it could not have been more sunny and amicable. The food was good, too. 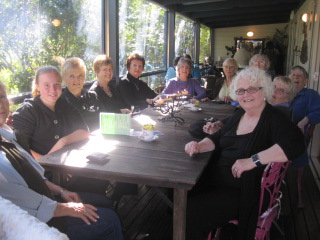 It was all very convivial, and we were congratulating ourselves on a successful show and upon being paid far more than we expected. We're saving-up for microphones and individual ones are quite expensive. I had a lovely warm chicken salad. 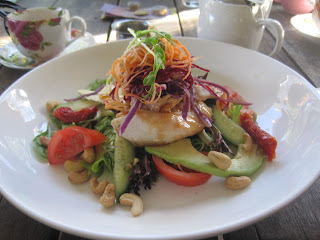 Afterwards we strolled around the gardens soaking up the sunshine . As you see, we're posed in front of apricot blossom so Spring is really on its way. 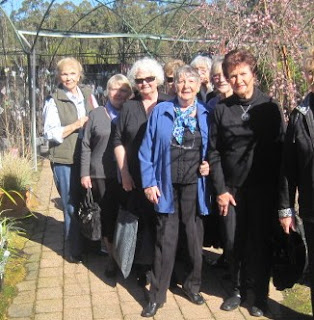 I'm still bandaged, but I forget about it most of the time. I'm hoping to be bandage-free tomorrow.

So true about the dates! And who is to say they live by our calendar. After all, the Chinese and Jewish calendar use altogether different calendars!

Good A choice with a solid rhyme♫
And while the world is not predicted to end, Biblicly, there are a lot of folks who worry (look forward to?), that it may be the end of the Age of Grace. Never hurts to be ready♫♪

If isn't the ATOMIC war that will get us, it will be the lack of AGRICULTURE as a result of the drought...
ROG, ABC Wednesday team

Great post for our start to Round 11. Looks like you had an awesome time on a spring-like day!

Looks so much fun with friends.